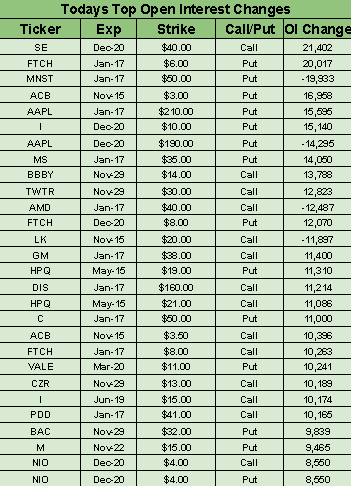 While major U.S. equity indexes recorded another flat close on Thursday, things are looking brighter ahead as DJIA futures climb more than 100 points before the open. Trade developments... White House economic adviser Larry Kudlow signaled talks over the first phase of an agreement with China were coming down to the final stages and said the two sides were in close contact. On Thursday, China also lifted a ban on American poultry that began in 2015, after the USDA made a similar decision to allow Chinese poultry into the U.S.

Amazon strikes back over JEDI contract

U.S. Defense Secretary Mark Esper is rejecting any notion of bias in a decision to award Microsoft (NASDAQ:MSFT) the "up to $10B" JEDI cloud contract, which is part of a broader digital modernization process at the Pentagon. "I am confident it was conducted freely and fairly, without any type of outside influence," he told a news conference in Seoul. Filing a notice that the company will formally protest the result, Amazon Web Services' (NASDAQ:AMZN) CEO Andy Jassy said politics got in the way and it would be hard to award a contract objectively when President Trump was disparaging Jeff Bezos.
Go deeper: 'Amazon's Next Growth Driver Will Be Bigger Than AWS' writes Bluesea Research.

The largest-ever Starbucks (NASDAQ:SBUX) is opening its doors today in Chicago, marking the company's sixth Reserve Roastery across the globe. The 35,000-square-foot location has five floors, three coffee bars, a cocktail bar and an artisan bakery and cafe. The average Roastery customer spends three to four times more money than at a typical Starbucks cafe, according to spokeswoman Maggie Jantzen, and Roasteries, on average, can see more than 8,000 visitors per day.
Go deeper: Beulah Meriam K says Starbucks is at a "good entry point."

The 50 state and territory attorneys general investigating Google (GOOG, GOOGL) for antitrust violations are set to expand their probe into the search and Android businesses, after initially focusing only on its ad business. The AGs will write up civil investigation demands to help the inquiry, but sources told CNBC the subpoenas might not be served immediately. Google already received a $5B fine in the EU for favoring its Android operating system, and the U.S. Department of Justice is reviewing the tech giant's business practices.
Go deeper: John Mason comments on another avenue of Google growth: Banking.

A new generation of Mustang

Ford (NYSE:F) is transposing its Mustang name on to its new electric sport utility vehicle, which up until now referred to a line of sporty coupes associated with the 1960s muscle car era. The Mustang Mach-E will debut at an event in Los Angeles on Sunday and is the first of more than a dozen all-electric automobiles Ford plans to launch by 2022. Although Mustang coupes are assembled in Michigan, the Mach-E will be built in Cuautitlan, Mexico.
Go deeper: Chris Lau gives four reasons to like Ford for 2020.

Cutting €2B of yearly investments, the European Union will stop funding oil, natural gas and coal projects at the end of 2021, as it aims to become the first climate-neutral continent. Gas projects are still possible, but would have to be based on "new technologies" such as carbon capture and storage, combining heat and power generation, or mixing in renewable gases with the fossil natural gas. This is a "quantum leap in its ambition," European Investment Bank President Werner Hoyer said after the decision, which comes as the ECB considers adding climate-related risks to its stress-test scenarios.

As political unrest grips the territory, Hong Kong forecast GDP will contract 1.3% in 2019, marking the first annual contraction since the global financial crisis a decade ago. Anti-government protesters paralyzed parts of the city for a fifth day on Friday as university students barricaded campuses and authorities struggled to calm the violence. The U.S.-China Economic and Security Review Commission also said Congress should enact legislation that would suspend the special economic status Hong Kong enjoys under U.S. law, should China deploy forces to crush the demonstrations.

Alibaba moving ahead with HK listing

Alibaba (NYSE:BABA) will issue 500M new ordinary shares plus 75M "greenshoe" options for its upcoming secondary listing in Hong Kong in which it could raise up to $13.8B. Of those 500M shares, 12.5M will be reserved for retail investors, though up to 10% of the total offering could be allotted. Set to be Hong Kong's largest share sale in more than nine years, Alibaba plans to use the proceeds to drive user growth and fuel innovation.