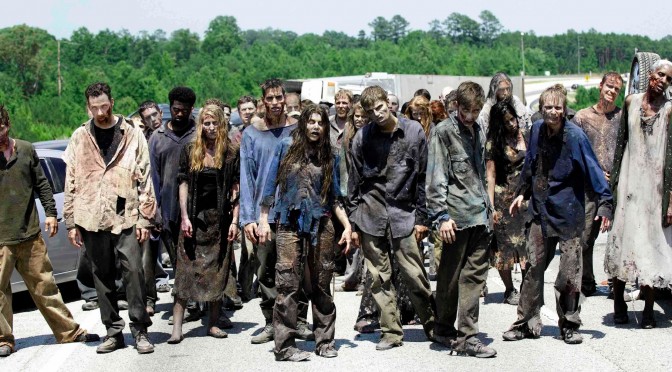 I know its not Christmas season yet, but this weekend while perusing the wares at a local Wal-Mart,  brightly lit Christmas trees donned an almost fully stocked section in the back of the store.

Halloween is weeks away, Thanksgiving feels like its months away, and Wal-Mart is stocking Christmas gear?  We live in a crazy world that's one epidemic away from sanity.... if that makes any sense.

News casts covering Ebola show medical people in these white protective suits with masks, goggles, and gloves.  If the holiday season shopping started today I think those suits would be the best sellers.  The Ebola Survival Kit only $39.99.   Oh Wait.  The shit is already flying off the shelves.

How many kids this Christmas are going to be running around the Christmas tree wearing goggles and a white suit?  "Look at me mom! You can spit all the blood in the world at me and I'm never gonna catch Ebola!"

Time had a nice piece out yesterday about the growing Apocalypse phenomena,

Ebola remains one of the top trending topics on Twitter (and now you know why I am writing this piece).

Nothing makes it feel more Halloween than people dying as blood comes out of their mouths and other orifices.  It's all about ratings, I'd imagine many of the networks are hoping this Ebola starts to spread.

From an economic perspective it would be bullish as a global pandemic would kill off all the surplus workers that have been dragging down unemployment figures.  News channels would see their rating spike.  Ebola gear would stoke growth in a number of industries.

And you wonder why governments are flying Ebola to their own countries?  It's not a conspiracy folks... Ebola Sells!

Just in time for some fresh Walking Dead episodes, we have a virus spreading that actually turned two woman in Africa into zombies!  They died and came back to life at their funerals!

In a few years we might not have to dress up as Zombies for Halloween.  I'm just curious what plan they would have under Obamacare.

Ebola Sells.  Ebola will cull the jobless from the economy.  Ebola will create a demand for protective gear, food supplies, weapons.

After the Great Depression a World War brought us back to prosperity.

After the recent Great Recession the World is still struggling.  A global pandemic might be just what the doctor ordered.