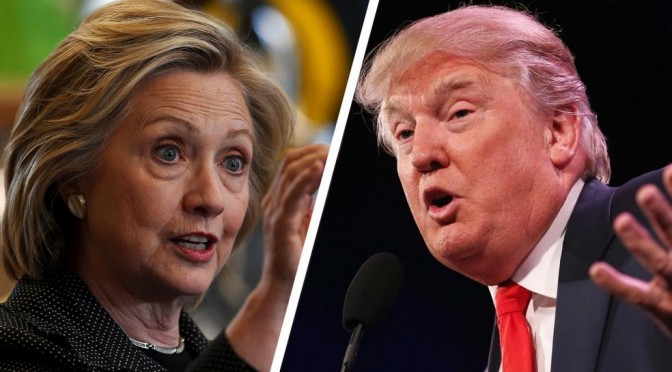 Wit the election fast approaching, what does this mean for the stock market?

This time around the new President will step into a stock market that is trading near record highs.

What will the stock market do in the face of the uncertainty that the November 8th election brings?

and some more great stats heading into and after the election:

From my perspective if Trump wins we could see asset prices fall, and perhaps we are already starting to see that as the polls have started to turn around for him.

Trump has talked previously about the market being in a bubble and the policies of the FED helping to contribute to it.

Republican presidential candidate Donald Trump repeated his criticism that the Federal Reserve has created a"bubble" and an "artificial stock market" through low rates that were designed to benefit President Obama.

"They're keeping the rates artificially low so that Obama can go out and play golf in January and say that he did a good job," Trump told reporters Monday aboard a flight to Youngstown, Ohio. "It's a very false economy." - from Bloomberg

However if Clinton wins we could see more of the same market action that we had with Obama , save for the pharma and biotech stocks as the drug price issue will come more to the forefront.

Many agree with this, and some think Clinton winning the election is already priced in.  Perhaps that is why stocks fell off a cliff on Friday when the FBI re-opened the Clinton investigation.

If history is a guide, a Clinton presidency would be better for the stock market, says Stephanie T. Withers, a senior vice president of Bel Air Investment Advisors with more than $6 billion under management.

“Consider the evidence. The average annual return of the Dow Jones Industrial Average Index (DIA) from 1901 through September 2016 has been 4.5%,” Withers said in an email. “Under Democrat presidents, the index has returned 7.0% on average, while Republican administrations have seen a 3.0%.”

Who will win the election?  According to a metric that has been right over 80% of the time, Trump will win.

One metric has accurately predicted the outcome of every presidential election since 1984 — the strength of the S&P 500 Index.

And right now, the S&P 500 is pointing to a Donald Trump victory on Election Day.

Bloomberg and CNBC noted this week that the stock market's decline does not bode well for Hillary Clinton, the nominee for the incumbent Democratic party.

"Going back to World War II, the S&P 500 performance between July 31 and October 31 has accurately predicted a challenger victory 86% of the time when the stock market performance has been negative," Sam Stovall, chief investment strategist at CFRA, told CNBC - from BI

Is the market already trading lower in anticipation of a Trump victory?  If he does win, how much further will stocks fall?  We'll take a closer look in the days ahead as election day nears.