Earning Season heats up next week as well as more Central Bank talk. 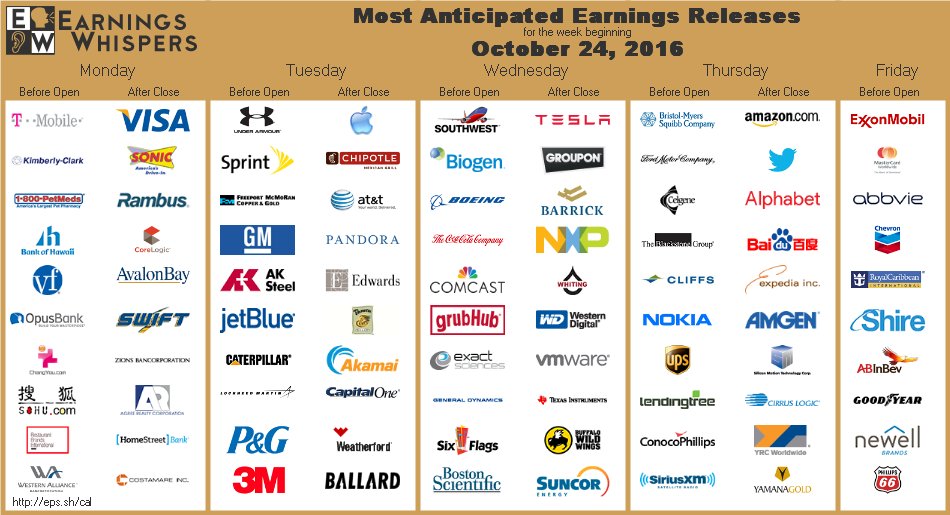 A flood of earnings, U.S. economic growth and some Fed speakers are set to hit markets in the coming week, and could help add confidence to a picture of moderate growth and an end to the earnings recession.

About a third of S&P 500 companies are scheduled to report next week, including Apple on Tuesday. Amazon.com and Google's parentAlphabet are set to post quarterly results on Thursday, the busiest day of the earnings season.

"If nothing changes … we would say we came out of the earnings recession this quarter and that the second quarter was the final quarter of this earnings recession," said Sam Stovall, chief investment strategist at CFRA.

Financials, materials and technology are expected to show the most earnings per share growth this quarter, Stovall said, while energy industrials and telecom are forecast to be the laggards.

In the past week, financials were among the top performers after the major bank earnings topped expectations. The S&P 500 gained about 8 points for the week to end at 2,141 Friday.

Next week, "I think really the big focus is going to be on earnings," said Casey Clark, vice president of investment strategy at Glenmede. "I think we're in a situation where investors are focusing on earnings and traditional drivers of equity markets. Part of that is there's more comfort on global central bank policy."

Correlation of S&P 500 vs. interest rates and EPS, last five years, in %

The average year-end S&P 500 target is 2,198, according to CNBC's Market Strategist Survey conducted in October. But strategists are watching whether earnings growth will sustain further gains in the market.

"Next year's earnings look too high, and that might mean the market is a tad more expensive than it looks, but it's helpful that the third-quarter earnings [are beating so far]," said Brian Nick, chief investment strategist at TIAA Global Asset Management, which has about $915 billion in assets under management.

"We're still making our way out of this period where energy earnings look weak compared to where they were one year ago," Nick said.

Most analysts expect the Federal Reserve to raise rates at its December meeting, but will watch data ahead of the central bank's meeting on Nov. 1 and 2. The Markit manufacturing and services PMI are scheduled for release next Monday and Wednesday, respectively.

Three Fed speakers are set to speak Monday ahead of the blackout period heading into the Fed's meeting Nov. 1 and 2.

The first read on U.S. gross domestic product is due next Friday, and the consensus estimate from Reuters is 2.5 percent. The final read on second-quarter GDP showed an annual rate of 1.4 percent growth.

A print between 1.5 percent and 3 percent is "probably a number consistent with the Fed passing in November but hiking in December," said John Canally, chief economic strategist at LPL Financial.

Other data scheduled for release next week include the Markit manufacturing and services PMI, the employment cost index, consumer sentiment and pending home sales.

Overseas, the preliminary estimate on third-quarter U.K. GDP is due for release Thursday, the first full-quarter GDP data since the surprise U.K. vote to leave the European Union.

"Brexit negotiations [are] always on slow boil every week and next week is no different," Canally said. "A very weak number on the U.K.[GDP] may weaken Prime Minister May's hand temporarily."

With all the talk about a looming recession and bad earnings that we get in financial media, it's so important to remember that it's just talk. Talk that has had no real support outside of a few struggling retailers that are out of touch with the consumer. Here we are in the middle of earnings season and some major companies ranging from banks to retailers to tech have put up some outstanding earnings, coupled with growing sales. Then, supporting the earnings data are a broad range of economic indicators that are all pointing to a sustained expansion.

Thursday gave us another week of low unemployment claims data that did move up slightly from last week's very low levels, but still remain near historical lows. As I've touched on before in this space, at this point in the cycle it's business activity that is now of utmost importance, since we know the economy is essentially at full employment. As long as claims data can stay around these levels or even drift up towards 300,000, we would have our Goldilocks labor market that's not running too hot or too cold, thus keeping the Fed at bay.

That said, Thursday also gave us some housing and manufacturing data that show the economy continuing to move along at a healthy pace. First up was the Phildelphia Fed Manufacturing survey, which came in above expectations with its new orders index jumping 14.9 points to 16.3 September, for its best reading since November 2014. 16.3 represents the percentage of firms reporting an increase in activity above those reporting a decrease. The shipments index also made a significant move, getting up to 15.3 from a prior negative 8.8 reading. 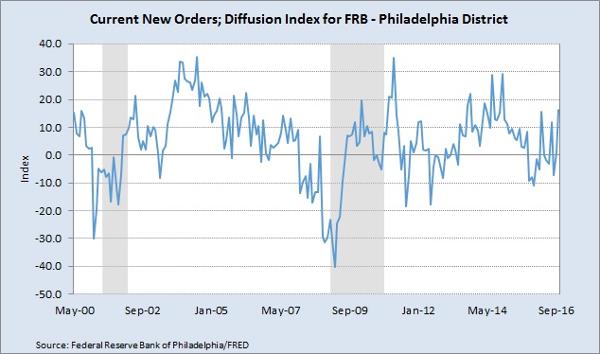 Next up was a very strong existing home sales (EHS) report that showed a 3.2% monthly gain in sales from August's already elevated levels, with median prices rising 5.6% from last year. Considering the lack of inventory and high prices, the growth in sales only proves how strong the demand for housing is out there. It's even more encouraging to know that home sales are running strong, with the strict lending standards we have today that help to ensure a healthy housing market going forward.

Lawrence Yun, the head NAR economist who presented the EHS data expressed his frustration with low housing inventory in this comment: "Unfortunately, there won't be much relief from new home construction, which continues to be grossly inadequate in relation to demand."

With housing in such demand, this has significant implications for the economy going forward as construction labor and building materials will be in high demand for the foreseeable future. Look no further than the excellent earnings report out of Pulte Homes (PHM) on Thursday that saw 29% and 16% Q3 year over year growth in sales and closings respectively.

To round out our actual data, not just talk, are some company earnings highlights which support the bull market thesis. Tech giant Microsoft (MSFT) had a phenomenal quarterthat blew away top and bottom line expectations and saw its stock trade up to a new all-time high in the afterhours. MSFT is a great example of a seasoned tech company that has adapted to the new tech world and is in touch with what consumers want. Then we had Paypal (PYPL) that also beat expectations, reporting 18% and 24% year-over-year growth in sales and transaction volumes respectively with the stock climbing 5% in afterhours. Strong PYPL earnings highlight the strength in online shopping and overall retail consumption.

Basically, this leaves us with an earnings season that is going well for the bulls so far, and leaves the bears with just talk.