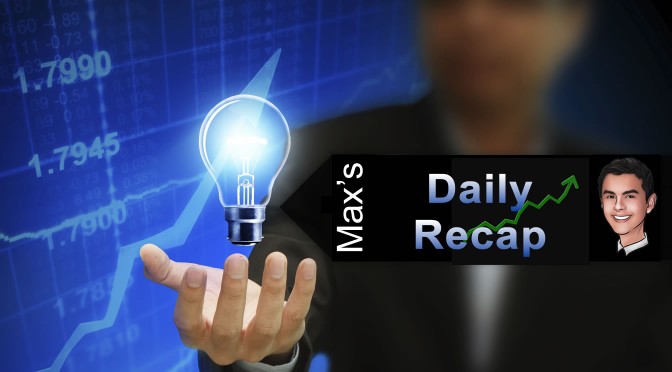 While the SPY today did a little backward and filling there were a few notable moves throughout the day. Stocks are starting to move a bit more, as we have seen some tech names start to have more volatile days like that of TSLA, now moving around $3-4 the last few days rather than the previous $1-2 range. I wont be looking to sell premium on this name until the IV starts to reflect the increased movement. Gold continues to be weak which I think is an indication of a strong jobs report Friday.

Looking at a few trade: First, financials continue to show strength, which is a positive for the underlying market. Notables include C, which broke out above 47.5 resistance that I spoke about and is now testing 48. I am still willing to short C, as the MACD has gone from positive to now flat and will go to negative should it give in a little. However, I would like to see a reversal candle, which could happen over the next day or two before I put on a bearish trade. This would come in the form of a doji or inverse hammer. However, given the jobs report, a strong number might propel financials higher so it might be smart to wait until after the number before putting on a trade.

The next trade I am watching is AAPL, I think the stock is most likely to move higher into year-end as the sentiment has shifted, and I think we are approaching a buy point. I posted a chart earlier today with potential support around 105.5. I would like to see how the stock trades tomorrow, should it open up I might trade it vs flat. This means, buy and if it goes negative sell. My target would be around $107.20 which would be the 38.2% retracement line of the recent rally from the July gap up. I would look to buy the atm calls and put a stop at 25%. The reason I would look to do this is that given its recent pullback it might be due for a 1-2% rally and this might come in the form of a bullish engulfing candle. Going into tomorrow if the stock looks rangebound I will look to sell either the 104 or the 105 puts as this will be a good way to leg into a long stock position should the name continue to fall while maintaining a bullish stance. Wednesday is premium crush day after all, and I only want to be buying premium if the momentum is clearly there, i.e, a gap up of some magnitude ($.25-$.50).  Should the stock not hit the short strike, I would collect the full premium, and if it were to hit it, I would start selling covered calls to reduce my net cost. 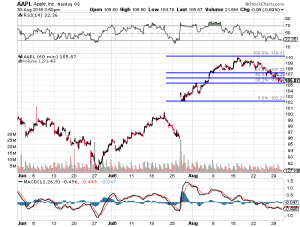 As for more premium selling trades, we are starting to see stock pick up in volatility where option prices are staying very low. I am not yet willing to start buying premium as most stocks don’t have a strong direction. However, given the apparent increase in volatility this means selling premium is not as attractive as it was a week or two ago. It is important to respect levels and not go against a stock. For example, when TSLA broke 220 on the downside it fell $10 in a few days. Other names to watch and there levels are the following:

GOOGL- $790 on the downside, $810 on the upside
If I enter any premium selling trades on these names (already have one on PCLN) I will use these levels as stops. I would need to see a strong volume move through these levels to stop myself out but the levels above represent the ranges these names have been in. A break of these levels is now more likely given that volume returns in September. Just something to be aware of for the next couple weeks.

I currently have two trades on for the week. I will try and find one more but as of now I am content with the positions on and will not try and push too hard to find others unless the premium received is fair. However, given the labor day holiday, I think Friday morning will be a good opportunity to sell premium for next week as there will be more premium selling. If there is a very good r/r trade tomorrow for next week I will put it on but it is much riskier given the jobs report. I would look to do something most likely in AMZN, NFLX, and/or SPY as these names will have a decent amount of premium in options for next week.