Are the $BTH shorts in over their head? Lets face it: the shorts, so far,  have been right. The stock has dropped from $45 to $8.72 over the last year.  Those are some big profits for the shorts. Yet, according to recent data they haven't covered their short positions.

It gets worse for the shorts. $BTH volume has fallen off a cliff. According to the NASDAQ, it would take close to 40 trading days just for the shorts to lock in their profits. That doesn't include normal trading volume.

Almost 60% of $BTH shares are in the hands of short sellers. The short sellers have yet to cover. If $BTH starts to see the price recovery that I think is coming we could be looking at a massive short squeeze as short sellers try to lock in profits before the stock rises. With no one to buy stock from, the shorts will be forced to pay an increasingly higher price to cover their short positions.

This is a high risk trade on a stock that, in my opinion, has bottomed and is poised for a sharp move to the upside. 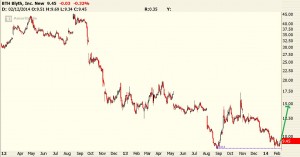 The trading action in $BTH has lulled many to sleep. No one thinks this short squeeze is coming, and there is indeed a chance it may never come. I believe it's coming soon and I think it will be a highly profitable move for those in the calls.

We have a habit of pointing out stocks at OptionMillionaires.com before they get hot, before everyone wants to buy them.  $BTH will be one of those stocks in 2014.