In 2012 Blyth had revenues over $1.1 billion, in 2013 just over $800 million.  What does 2014 have in store?   That is the question for shareholders and one not easily answered.  However I think the recent reaction to Blyth's earnings report provided a clue into where the stock could be headed over the short to medium term.

When $BTH Blyth, Inc. reported earnings this month the stock had every reason to decline, yet  it rallied instead.  Headlines stated $BTH Blyth, Inc. stock rose "despite missing estimates".   What does that tell me?  The bleeding has stopped for $BTH.  Another sign is the double bottom for $BTH earlier this year just under $9 a share as the chart below shows. 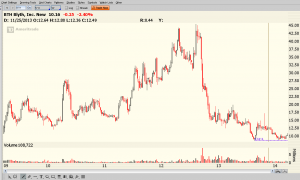 I have harped upon the massive short interest in the stock.  And while it may prove to be a factor in 2014 as $BTH rises in price, I think earnings and growth will be what drives the stock this year and beyond.  The 55%+ shorts may want to revisit their investment thesis in the name this year, however the price of the stock may dictate it for them.

$BTH remains a long term turn around trade and by the time the turn around is in 3rd gear this will be a $20+ stock.  Money isn't made in this market buying at the top - just ask the herd that was buying $FB at $71 a share.

Money is made buying stocks no one likes.  Stocks that are mispriced because the market does not understand them.  $BTH is one of those stocks.  The company reported over $800 million in revenue last year and over $55 in revenue for each share outstanding.  They have a solid financial foundation and insiders who believe, based on last years buyout rejection, that the stock is worth well over $16 a share. Yet here we are at just over $10 a share.  A move back to that buyout offer from late last year represents a 60% move from current levels.

I own and will be a buyer of calls for $BTH in 2014 in anticipation of a solid move to the upside.  As the stock continues to recover from its 2013 collapse, I think a move to $13 in April is in the cards and the stock has a good chance at reaching over $20 a share before the end of 2014.  The bleeding is over.  The stock, in my view, has bottomed.  And in 2014 we could witness a resurgence for $BTH.

One thought on “$BTH Blyth, Inc. Why Shares Should Head Higher”