Over the last few weeks the airlines have sold off rather dramatically. Both DAL and AAL were leaders to the downside breaking multiple areas of support. This morning, both stocks opened sharply lower but then climbed the rest of the day. So what did this tell me?

It told me that the selling should stop for the next few days. The reason is that despite the S&P 500 continuing lower throughout the day both AAL and DAL were rising. This means that people were shifting a lot of money into these names. Not only did AAL rise throughout the whole day it managed to close positive and also at its HOD. I believe that both airline stocks will have a few days of gains and will probably go back to the level at which they broke-down. I am in the August ATM calls for a 1-2 day trade. I bought the August calls for a few reasons. First, the IV will decline rather dramatically on the next up day meaning that the weekly calls may not rise that much because they are currently overpriced. Secondly, if DAL and AAL were to be flat to marginally up over the coming days I would still be up on the trade rather than have a loser due to time decay. Lastly, if DAL and AAL were to fall I think that because they are so oversold they will recoup those losses rather quickly.

Besides both stocks being oversold they both had bullish hammer reversal candles today. That alone should mean a reversal to the upside over the coming days. Due to the pressure of the overall market I will not hold the calls too long. I am targeting $1-$3 of upside in each stock.

Below is a chart that illustrates prior sell-offs and what happened following a reversal candle. 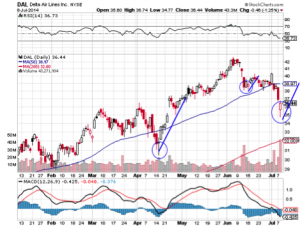 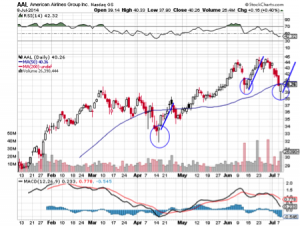 One thought on “Why I Bought DAL and AAL Today”