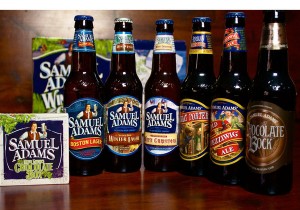 We have written about Boston Beer (SAM) a few times over the past month explaining out bullish sentiment, and why we felt the stock would break over $160. Since our last article Boston Beer (SAM) reported it's earnings for the fourth quarter that met expectations, and issued an outlook that was inline as well. With the stock up 16% to start the year, and over 60% over the past 12 months, folks were expecting the stock to pull back on valuation concerns. Instead the stock has been very resilient, and sprung above the $160 mark, before finding resistance and falling back into the mid $150s.

Analysts continue to doubt Boston Beer (SAM), and have reiterated sell ratings or downgraded the stock. On February 21st, UBS maintained it's sell rating on Boston Beer (SAM) but raised it's price target $6 to $117. If you compare the UBS analyst comments from the initial downgrade in July 2012 to the reiteration on February 21st, you would think their reasoning for the rating was identical which was wrong  7 months ago, why would one expect it to be right now?

UBS reports that 70 percent of Boston Beer’s recent growth has come from its Twisted Tea line and seasonal craft beer program. But UBS believes that slowing distribution gains for Twisted Tea and the lack of new seasonal offerings in the Samuel Adams portfolio will slow the current YTD trajectory.

Angry Orchard ciders, launched last year, were a hit and that growth will be hard to match. For SAM to reach Street targets, UBS calls for more innovation and improvement from core Sam Adams portfolio

Today Williams Capital downgraded the stock from outperform to perform while raising the price target to $160. These analysts continue a trend on Boston Beer (SAM) since it's IPO where they issue a sell or neutral target on the stock, only to reissue the same rating months later while raising the target price. A trend that we think will continue as the stock climbs towards our short term target of $180.

Goldman Sachs has been the worst offender when it has come to predicting Boston Beer (SAM) 's future. Goldman has had Boston Beer (SAM) at a Neutral or Sell since it's IPO over $20. Anyone following their advice would have sold and shorted the stock at $40.  Based on the short interest, it looks like that's exactly what they have been doing or recommending their clients to do.

So how can all these analysts be wrong? The American beer market has struggled with negative growth since 2008, so that could be a factor in their analysis. Yet amongst all the negativity, craft beer has been a shining star, showing double digit growth for sometime now. And now, more then ever, it looks like Americans are back to drinking brew based on Inbevs last earnings report. Maybe Budweiser and Molson Coors are starting to fear the Craft Brews, which continue to show amazing resiliency and growth with Koch from Boston Beer (SAM), leading the charge as the 'Godfather' . It would probably be in the best interest of those companies to ensure the one true publicly traded American Craft Brewer is portraid to the public and investment community in a less then positive light? While at the same time, folks with bigger money then you and I, are trying to short the stock into the ground? But it looks like they underestimated the loyalty of Boston Beer (SAM)'s shareholders, the ones who were in on the IPO before the Goldman Sach's led offering.

With a P/E ratio in the low 30s, and the forward P/E dropping into the 27s, the bear case of the stock being over valued are unwarranted. With the potential catalyst for upside guidance from Sam in a can this summer, and the return of the American Beer drinker, we think the stock is poised to continue to break out in a major way. New short numbers are out on the stock and still show 24% , or 1.99 million of the shares are being held short. With the stock averaging less then 100k per day in trading volume, one would expect those betting the wrong side of the Boston Beer (SAM) story to start covering their underwater position, which should also help fuel the rally.