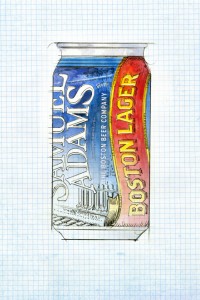 Boston Beer (SAM) broke out in a big way today, adding $10.19 or nearly 7%, to close at an all-time high on nearly 2 times the average volume. Boston Beer (SAM) announced yesterday afternoon that they will finally start offering their trademark Boston Lager in a can in mid-2013, paving the way for more revenue opportunities, while also allowing folks to enjoy their favorite Beer in some locations that are not bottle friendly like sporting events, the beach, boating, or other activities. Was that news the catalyst for todays huge move? It's possible, but we think unlikely. The news was out yesterday afternoon, and you can see from the chart below, Boston Beer (SAM) shares really started to break out during the last hour of the trading session, and were somewhat stagnant before that. 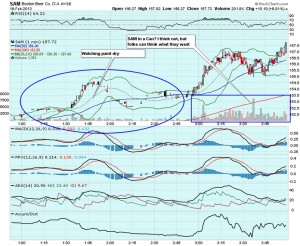 So what was the reason for the large move? With Boston Beer (SAM) reporting Q4 earnings after the bell, we think folks are getting positioned for a rather violent move to the upside. A move we have been talking about for a few weeks now. Back in late January, we thought Boston Beer (SAM) was poised to break over $150, where we would see some serious short covering action. This is what we said:

With a track record of solid growth, a great balance sheet with zero debt, and position as one of the top 2 U.S brewers, we  feel the stock is poised to continue to ramp higher though January and February, especially as the market continues its march above 5 year highs. We are watching the $150 level on Boston Beer Co, Inc (SAM) as an area where volume and interest will really gain steam, and those betting on story on the short side, will throw in the towel.

It looks like today was confirmation of what we think is going to happen over the next few weeks, as folks start ignoring the analysts and shorts who have been wrong on the stock since $20, and start seeing the potential Boston Beer (SAM) has for future growth and market share gains. One only has to look at Molson Coors Brewing's (TAP) most  recent earnings report on thursday to see how craft brews are taking the country by storm as it's flagship Blue Moon brew continued it's double digit growth in 2012.

Nothing is ever certain, and it is very risky holding any position going into earnings, so please make sure you do your own due diligence. But we really like Boston Beer (SAM) to continue to defy gravity and continue hit all-time highs.

We currently hold March $165 and April $170 calls which we may add to or liquidate at anytime in the next few sessions.