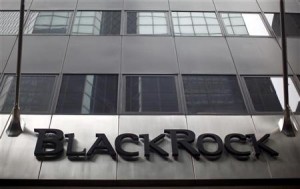 With the S&P up over 16% year-to-date, it can be hard to find some stocks that have potential to break out... or is it? Laggards in this type of market are usually the ones with poor fundamentals or growth. Finding ones that maybe slipping through the cracks could offer a nice risk vs. reward scenario. We think Blackrock(BLK) is one that fits the bill.

With earnings beats in the last 9 quarters dating back to mid-2010, one would think the stock would be up quite a bit from there, but it's actually down $40 from its $220 high. There are some concerns over Blackrock(BLK) and it's revenue growth and that is one of the reasons the stock fails to find its footing. It's also losing ETF market share.  But in this era of easy money, where folks are looking for places to get a return on their equity, a stock like Blackrock(BLK) could be one to look at.

The financial sector is up 23% Year-to-date yet Blackrock(BLK) is only up 3%. Somethings got to give. We are thinking it will be Blackrock's(BLK) shares to the upside.