It appears as if everyone is calling something that occurs in the markets a bubble these days.

Characterizing everything occurring in the financial markets as a "bubble" is the lazy way to explain something that has moved up too far and too fast, or that's what folks are led to believe. Bitcoin? Bubble. S&P, Dow and the NASDAQ? Bubble. Twitter, Tesla, and 3-D stocks? Bubble. The list goes on and on.

So: figure that I would take one of my short ideas from the summer and reiterate my Bubble Post which was probably one of the first in 2013. Basically, the Aussie's run from 2008 is over: https://www.optionmillionaires.com/is-the-aussie-the-next-bubble-to-burst/

Why? Well, first and foremost Glenn Stevens, Australia's Reserve Bank Governor, continues to hint at plans to weaken the currency. Also: recent economic numbers from Australia continue to be weak, with their latest GDP numbers coming in below expectations.

We wrote in July on how we thought the Aussie was ready to drop under 90, and it did before bouncing in the low 90's.

With Japan weakening its currency via its "Abenomics" policy -- named after Japanese Prime Minister Shinzo Abe -- it would make sense that the Aussie's decline was put on pause. But now seems the perfect time for the Aussie to fall through previous lows and move towards 83 in the coming weeks.

So how does an option trader make money on a move on a currency? By trading exchange-traded funds, or ETFs. One such ETF is CROC, and it's an ultra-short ETF that tracks the Aussie. We currently hold $47 December calls on CROC as well as being short on the AUD/USD from 91.69. 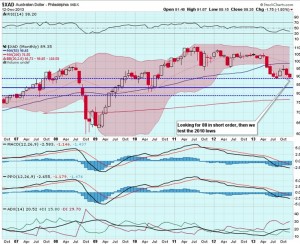 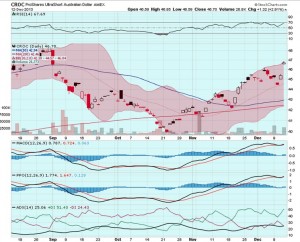