Gap  (NYSE: GPS) reports earnings tonight after the bell and is expected to post its Q2 EPS at$0.48 on revenue of$3.55 billion.     The stock has doubled over the last 8 months with the last trade at $34.48.  I think the stock is going to move at least 5% tomorrow.  Given the recent run-up in price I am leaning toward puts, but have also hedged my large put position with a smaller call position. 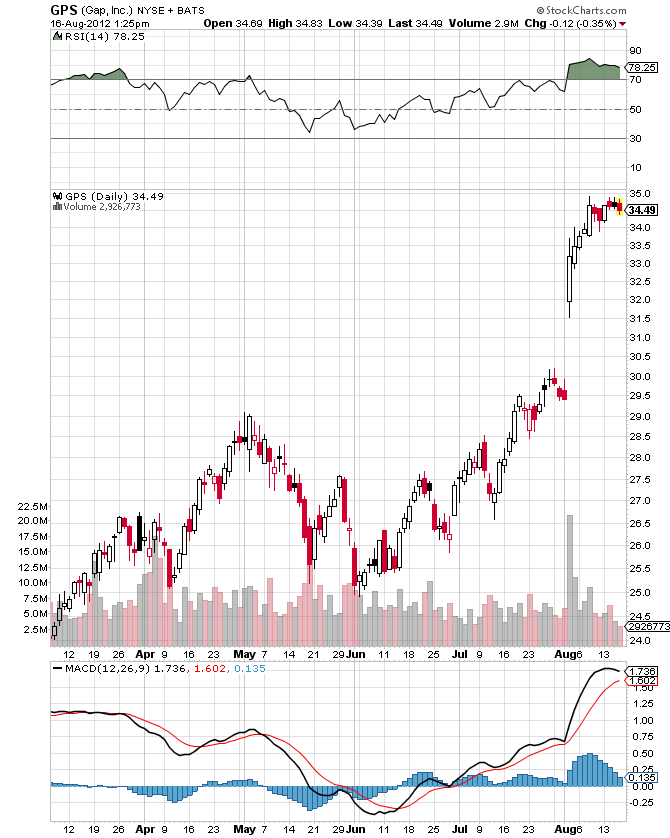 The Gap (NYSE: GPS), which is trading near a 52-week high, is scheduled to report its second-quarter 2012 resultsThursday, August 16, after the markets close. Investors will be hoping that the company continues to offer revenue growth, good cash flow from operations and expanding profit margins.

Analysts on average predict that Gap will report per-share earnings of$0.48for the three months that ended in July, as well as$3.55 billionin revenue. In the same period of last year, the company reported a profit of$0.35per share and$3.39 billionin revenue. Analysts have become more bullish as their earnings per share (EPS) estimate has risen in the past 60 days from$0.37. Note that analysts underestimated Gap's per-share earnings in each of the past six quarters. First-quarter earnings exceeded consensus EPS expectations by a penny per share.

The company said in the first-quarter report that its better-than-expected results were due in part to revenue gains at its Old Navy,Gap and Banana Republicchains, as well as strong online sales. The results prompted Gap to raise its full-year EPS outlook. The share price rose about 8 percent immediately following the report.

Looking ahead to the current quarter, the consensus forecast calls for sequential and year-over-year growth of both EPS and revenue. And so far, analysts expect full-year per-share earnings growth of about 25 percent, as well as for revenue to be about 6 percent higher than in the previous year.

San Francisco-basedThe Gap Inc.is a specialty retailer that offers apparel, accessories and personal care products for men, women, children and babies under the Gap, Old Navy,Banana Republicand other brand names. The company has approximately 3,000 company-operated stores and 200 franchise stores in 90 countries. The company is an S&P 500 component with a market capitalization of about$17 billion. It was founded in 1969.

Competitors include Abercrombie & Fitch (NYSE: ANF) and American Eagle Outfitters (NYSE: AEO), as well as big-box stores like Target (NYSE: TGT). Abercrombie said this week that its earnings and sales both fell, partly due to the recession inEurope, but EPS were in line with analysts' low expectations. American Eagle is scheduled to post results next week, and its per-share profit is forecast to have doubled year over year.

Gap's long-term EPS growth forecast is near 10 percent. Its operating margin is higher than the industry average, and the return on equity is a more than 24 percent. The dividend yield is near 1.4 percent. But of 28 analysts who follow the stock surveyed byThomson/First Call, only nine rate the shares at Buy or Strong. The current share price has overrun the analysts' mean price target, so the stock may be due for updated targets after the earnings report.

Stronger-than-expected sales in July has pushed the stock more than 23 percent higher in the past month, and the share price is up nearly 87 percent year to date. The share price is well above the 50-day and 200-day moving averages. Over the past six months, the stock has outperformed all three of the competitors mentioned above, as well as the broader markets.