It is deja vu all over again. Stocks are near record highs and the same broken records that have been scaring people out of equities the last ten years continue to adjust their time frames for pending, imminent stock market calamity.

It's 1929 all over again states renowned bear Hussman who has been saying the market will drop 60% every year since he called the financial crisis in 2008.  Talk about pressing your luck.

Hussman states that todays market is the best time to be short since 1929, as if he was actively shorting the market via SP500 futures back then.  Shorting the market every day since 2009 hasn't stopped Hussman and his bearish henchman from getting covered on financial media far too often then those who have been rationally bullish the last 10 years.... ironic isn't it?

Perhaps we are nearing the recession everyone is talking about these days.  And even if we are, there have been plenty of recessions that have seen the market fall 20-25%  not the 50-60% declines that Hussman has been calling for the last 10 years.

Ironically a 50% decline for the market tomorrow would not even get Hussman back to his initial fear mongering - sell everything warning levels.

And.. as I have stated numerous times previously,  every market decline for those with a longer term time horizon, is just an opportunity to be buying more stock for less money.  Yes the bears will tell you this is a terrible idea.  Even James Cramer on CNBC was telling everyone to sell at the lows during the financial crisis.  But in reality 2008/2009 offered tremendous bargains.

If today's market isn't 1929... surely we can compare it to another ugly time in market history for  maximum fear mongering efficiency.

Next up... it's 2007.  Quickly becoming a favorite of marketwatch.com after they stopped letting some guy named Paul Farrell go after his 100% stock market crash of 2016 never came to fruition....

Sven has a tremendous knack for writing.  Carefully crafted charts that almost always point to significant downside... unless he's writing about the VIX.  The VIX is always going higher.  Always...  its going to explode.  And each bearish post has some sort of imagery with fire and smoke in it.  It's depressing really... and more importantly its been plain wrong the last 10 years.

Today marketwatch has featured his article, in which the main thesis is that 2019 is the same as 2007.

Of course he was comparing 2019 to 2007 at the start of the year too with his usual VIX spike market collapse write up.  It went on to rally over 30%+ from there.  No update of course.  Just another slinging of shit at the wall nine months later with the hope that it will stick this time.

We have zerohedge... and yes you don't have to look very long to find a bearish article on zerohedge.

Look at how the market has done since Zerohedge began their bearish crusade. 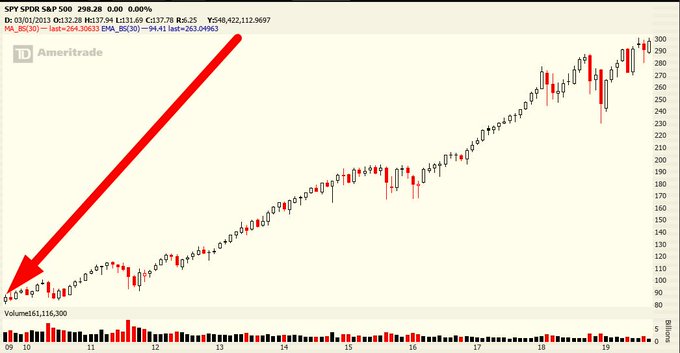 the market is going to crumble from here ... right?

Short term, we could definitely be seeing weakness.  Momentum has slowed.  However I think longer term this market is going higher.  And yes... I've been saying that for quite a long time.  New record highs are coming.  And I've been right about that.  And yet its the bears that get all the headlines.

Remember even in 2011 when the market was pulling back.  News trucks filled wall street.  How about this year when the market hit new record highs.. nothing.  No confetti.  No celebration.

I like this snipped from a great read when you get a chance:

How true is that for the market today.  I don't think we've hit the euphoria stage. Optimism?  My goodness.  There is a void of optimism.

When Marketwatch is featuring bearish articles, its because they draw readers.  They draw clicks.  And when you see people agreeing with the bearish bias, its not because they are long this market.  You don't speak of impending 1929, 2000, 2007 esqu market calamity while 150% long the S&P500.

So while I could see momentum turn south over the short term, I still think we hit new all time record highs before the end of the year.  And that 2020 will be another year where the bears get to sling their bearish shit at the wall.. hoping it sticks.  Right now.. they just smell.

I think the lows we saw at the end of 2018 were the lows we will see for some time.  Yes I think 2020 will be another year riddled with bearish calls from the same bearish folk.  Pessimism will continue to rule.   And yet the market will continue to to defy to the upside.  Those same bears who've been wrong every step of the way will still get featured on marketwatch, while this market just keeps doing exactly what they think it isnt supposed to be doing, for a lot longer than even those who think it should be doing what its doing... if you know what I mean.